A GARDEN OF FOOLISH PLEASURES 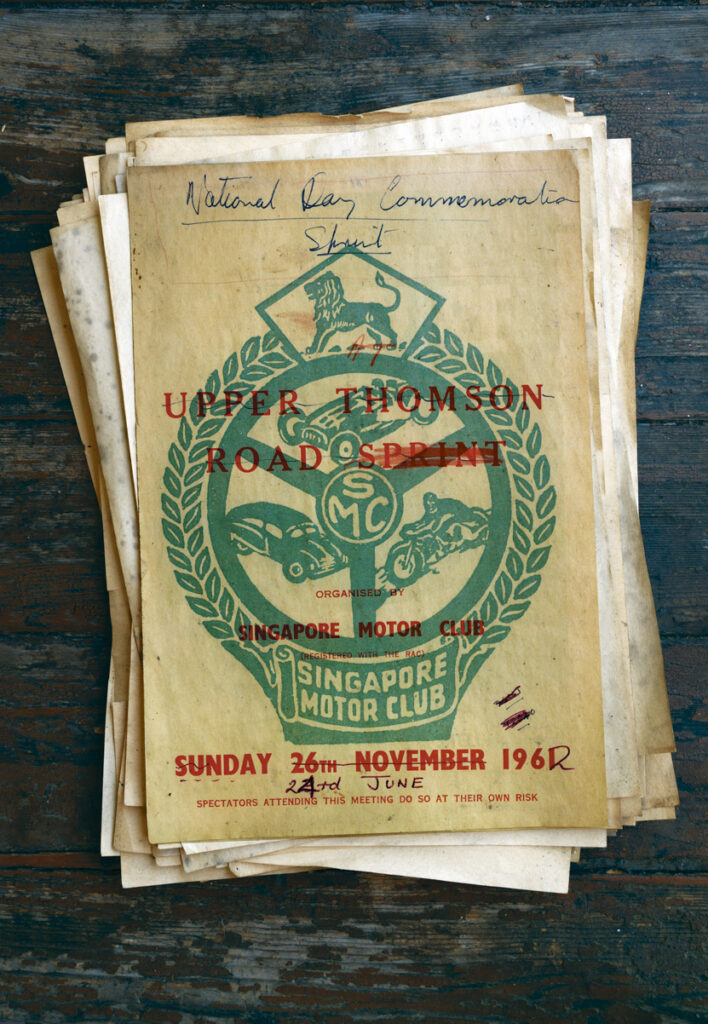 LAY OF THE LAND: Today, Upper Thomson Road is just another dual-carriageway in an area that is earmarked for rapid redevelopment. It begins after the MacRitchie Reservoir and continues north to the junction of Mandai Road where it joins Sembawang Road. Up to February 1939, this was simply called Thomson Road, stretching from Newton northwards. For a period after the Second World War, Upper Thomson Road was a section that commenced at the entrance to Lower Peirce Reservoir, where the Kallang River crossed Ang Mo Kio Village, and ended at the Mandai Road junction. This two-lane black top meandering through kampongs and plantations was the trunk road that fed the island’s Naval Base at Sembawang and provided an alternative route to the Causeway to Johor, via Mandai Road.

In 1958, a new trunk road scythed through some of the plantations between Lower Peirce and the Seletar Rifle Range (later the Nee Soon Rifle Range) to improve the flow of traffic to and from the various military camps and the naval base. This new road soon attained a reputation as an ideal drag strip for speedsters. Residents along the road moaned of this new menace in letters to the forum pages of the Straits Times. This, before the road attained infamy as Murder Mile during the Grand Prix years of 1961-1973.

A NEW CIRCUIT: Back in 1960, the SMC were searching for a suitable site replacement for the Princess Elizabeth Estate Sprint, which itself had replaced the Lim Chu Kang Sprint. At the same time, the “speed wallahs” were scouting around for a venue to host a proper Grand Prix to rival that of the Johore street Grand Prix. In 1960, Old Upper Thomson Road presented itself as the ideal alternative for club Sprints, now that the main traffic flow was via new Upper Thomson Road.

This latest Sprint course turned out to be immensely suitable for racing with access from Yio Chu Kang Road, Thomson Road as well as New Upper Thomson Road via Mandai. The organisers decided that it would be wise to avoid the bus depot and school off Casuarina Road, and so the Start for the first sprint was placed a short distance up the incline into Old Upper Thomson Road.

The end of this short straight led the driver to a fast left-hander and an S-bend, what would eventually be called The Snakes. A double chicane, only installed on race day, slowed the entrants down before the treacherous right-hander, Devils Bend. It was then a flat-out section to the finish of this challenging course lined with drains, embankments and ravines on either side. Oh, and dwellings as well.

STATELY RESIDENCES: Amongst the plantations and farms along the circuit was one rather interesting rambutan plantation. That there were Chinese artists painting, sipping tea and consuming tropical fruit at Han Wai Toon’s garden at the 9th Milestone escaped notice of most entrants. Han, a Hakka artist who aspired to design the best wild lychee garden around, would eventually sell his plantation in March 1962. Between the 1930s and the early 60s, however, Han’s ‘Garden of Foolish Pleasures’ was well-known amongst Chinese painters and ceramic collectors.

Another family dwelling was also affected by the developments in the area. The Looi family had been living on Old Upper Thomson Road for decades. Their home, as Looi Im Heok recalled, was of historical significance. On the eve of the Japanese occupation, their bungalow, on the raised ground of Old Upper Thomson Road, was commandeered by Lieutenant General Arthur E. Percival upon his arrival in Singapore in May 1941. Percival stayed there for about a month before his entourage retreated south. Looi, a talented motorcycle rider known affectionately as ‘Corner King’, welcomed the introduction of racing to the vicinity with open arms. One outcome, however, was that the din from bikers practicing around the circuit in the run up to the races caused the chickens at the poultry farm next to Looi’s workshop so much stress, they stopped laying eggs for the period.

The farms and plantations along Old Upper Thomson Road have long disappeared, the only evidence of habitation on the ‘island’ of greenery between Old and New Upper Thomson Road today are the ‘escapee’ plants, brick foundation stones and fresh water wells.

START YOUR ENGINES: The first practice session of the 1.4-mile (2.25km) Upper Thomson Road Sprint was run on 2nd July 1960, and by all accounts, few made it round Devils Bend without mishap until chicanes to contain the over exuberance were installed after practices. With 78 entries (50 cars, 28 bikes), it was clearly a well-received opportunity for some racing. Amongst the entrants were Singapore’s top drivers Chan Lye Choon, “Fatso” Yong Nam Kee, Freddie Pope, Jan Bussell and veteran Jimmy Milne in his 25th season of racing. There was an eclectic mix of machinery on exhibition on Sunday race day, a range that included racing Cooper JAPs, Jaguar XK120s, an Austin Healey 100/4 and the locally-built Riley Special, a brick called Fribus after its owner Francis Jan Bussell.

A midday shower made it even more challenging for the cars and bikes. Fortunately, this was an individually-timed sprint and not a mass-start event. Chan Lye Choon, winner of the 1958 Macau Grand Prix, was easily the fastest in his unusual choice of car, his aged Cooper JAP. His 56.08-second time in the Unlimited class run was fastest time of day. One of Singapore’s top bikers, finance company owner Louis Chia, won the Unlimited class in the motorcycle event and promptly hung up his helmet to concentrate on managing his company.

THE IDEAL VENUE: Not content with just a one-off sprint at this new site, the SMC organised a second sprint at the end of November, the club’s last event for the 1960 season. Back in action were Tony Huggett and very eager local ace builder and racer Lim Peng Han. Lim had been side-lined due to an illness and was keen to get back to winning ways in his Lim Special, and Huggett had his very potent Lotus Eleven ready. There were a number of new arrivals as well – a rare Turner Climax, an even rarer 3.4-litre Jaguar SS100 and a new Volvo 122S driven by Lim and good friend Mike Evans. Other entries include Abarth Fiats, Speedwell Austins, an 1100cc Hansa with trick Isky camshaft and a Porsche 356. Lim made amends for missing the July sprint and won the Unlimited class in his aged Lim Special that Sunday afternoon while Evans won his class in the Volvo’s debut outing in Singapore. Veteran racer Jimmy Milne set FTD in the 1098cc Cooper JAP that he shared with Chan Lye Choon.

By the time the first Singapore Grand Prix was held in September 1961, Sir James Lockerbie and the organising committee of the SMC had laid enough rubber with three sprints on Old Upper Thomson Road. For the local drivers and riders, the Upper Thomson Road Sprint was their unfair advantage in the upcoming Grand Prix.